I walked past Mill Road Butchers on Friday and decided to pop in to see what they had. The pheasants looked good so I picked up one for the Sunday.
As pheasant is notoriously dry I decided to cook it in parts. On Saturday I took off the legs and put them in brine (Water, salt, thyme, rosemary, smashed garlic. black peppercorns and allspice berries) to sit in the fridge over night. I also took off the breasts and chopped the carcass into chunks. The breasts went back into the fridge, the carcass with some chunks of onion and root veg into a hot oven until nicely browned, deglazed the roasting dish with a generous glug of port, filled up with water and let boil for a while to get all the bits off the bottom, then transferred the lot plus a good handful of dried mushrooms into a saucepan and simmered for a couple of hours, then passed the stock through a fine sieve, retaining the mushrooms and let it cool before moving it to the fridge.

On Sunday morning I patted the brined legs dry with kitchen paper, added them and the aromatics from the brine to a saucepan with barely simmering duck fat, waited until it was back to a simmer and then transferred the pan, covered in foil, to a low oven (just under 100 degrees on my dial, I checked every now and then that it stayed at a simmer). After about two hours they were done, nice and soft to the touch. I took them out and fried them skin side down in a hot pan until crispy (a few minutes). Then removed them and kept them warm while frying the breasts in lots of butter on a medium heat until nice and pink in the middle.

Then I checked the seasoning and served the lot, for I am greedy and was on my own, with crushed potatoes, steamed curly kale, cauliflower puree (see below) and a sauce made by reducing the stock with the mushrooms.

The cauliflower puree I started the day before by chopping the head into chunks, tossing them with olive oil, smoked paprika, cinnamon, sumac, salt and pepper and roasting them in a medium hot oven until soft and caramelised. On the Sunday, I reheated the chunks, added some stock and pureed them in the food processor, adding a little bit of whole milk for consistency. This was the element that brought everything together and I only made it because I had a cauliflower I needed to use up. I originally wanted to make soup but then had the idea to make a puree. The spicing worked really well. 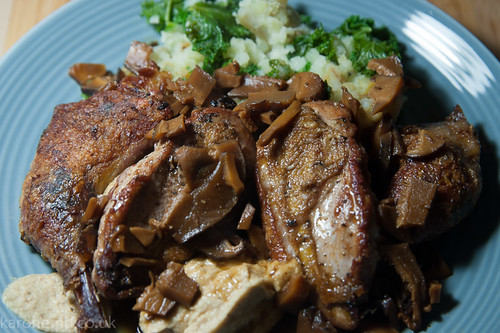