I love cheaper cuts that need a bit of love and attention so when the Art of Meat had lamb neck, I picked up a few chunks.
I dusted them with seasoned flour (salt, pepper, smoked paprika), seared them in rapeseed oil in a hot casserole until brown all over, took them out and in the same pan fried chunks of onion, leek, carrot and garlic until softened slightly, put the meat back in, about half a litre of red wine and chicken stock each to just cover,added a sprig each of rosemary and thyme, put a lid on, let it come to a simmer and transferred to a 100 degree oven for about 3 hours. I took out the meat to rest, strained the liquid, took half of it and reduced it until it was thickened a bit and shiny. Adjusted the seasoning with salt, pepper, smoked paprika, ras el hanout and sumac. Meanwhile, in the rest of the stock, I cooked the sweet potatoes until tender and mashed them with milk, butter and seasoning.
Finally, I picked the meat off the bones, removing excess fat and gristle, warmed it through in the sauce and served on top of the sweet potato mash and some steamed and buttered kale.
Plated it looked like this 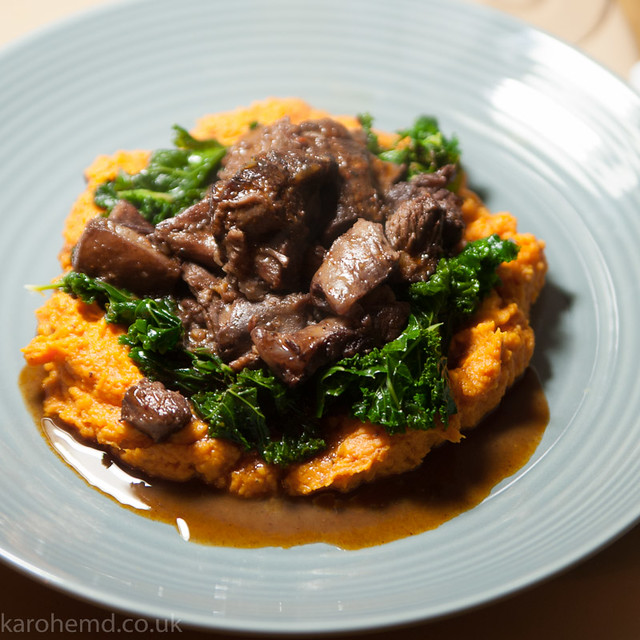 This also freezes well and is even better the second time round, like many stews and braises

Having had short ribs in various shapes and cooking methods at restaurants and from street food vans, it was time to try my hand at cooking them myself when I spotted a nice rack at my local butcher’s, the Art of Meat. I decided to braise them so cooked some roughly chopped celery, leeks and garlic in rapeseed oil until softened a bit, seasoned with pepper, bittersweet and hot pimenton, thyme and rosemary, filled up the pan with a bottle of porter (Wychwood Brewery’s Black Wych), brought it to the boil and added the seared rack of ribs. The covered pan went into a 180 degree oven for half an hour after which I turned the heat down to 120 and left it alone for about three hours. Prodding the meat, I decided it could do with a little more time and put it back for another 45 minutes which turned out to be plenty as I had difficulty getting it out of the pan in one piece. I had to push it back together for the photo. 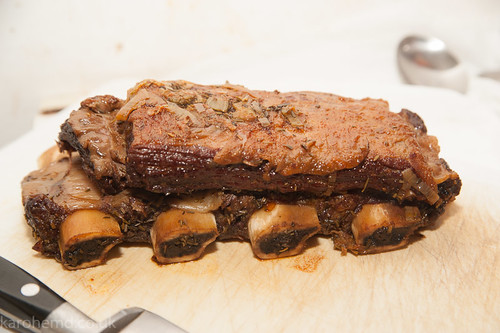 Having strained the liquid, I reduced it by about half until it had a good sauce consistency (by how much you need to reduce it will depend on how much liquid evaporated during the cooking process) and then added a good pinch of salt. I then shredded the rib meat, removing bits of fat, gristle and connective tissue that hadn’t broken down and mixed it with the sauce. A potato mash (maybe with added celeriac or parsnip) would go well with this but I just had fresh bread and a large bowl of dressed leaves with it.
The texture of the moist meat was pretty much perfect, the flavour very savoury with a distinct bitter note from the porter. I think next time I’m going to add some warm spices (cinnamon, cloves).