The fish van had some really good and fresh looking salmon so I picked up a fillet with the aim to confit it.
I mixed salt, freshly ground pepper, thyme and maple syrup into a paste, generously rubbed the skinned fillet with it, wrapped it in cling film, let it sit for an hour and then washed off the cure.
I then filled a saucepan about halfway up with olive oil and heated it to 50 degrees and switched the heat off. I cut the dried salmon into three pieces so I had one thick piece of even thickness and two thinner ones to allow for even cooking. The thinner pieces needed about 30 minutes, the thicker one 45 for an internal temperature of 45 degrees.
The skin obviously didn’t go to waste. I scraped it clean and fried it between two sheets of baking parchment with a saucepan as weight on top (to make sure it stays flat) on medium heat until crispy. You don’t need to add any oil as the skin is fatty enough and the baking parchment ensures it won’t stick. 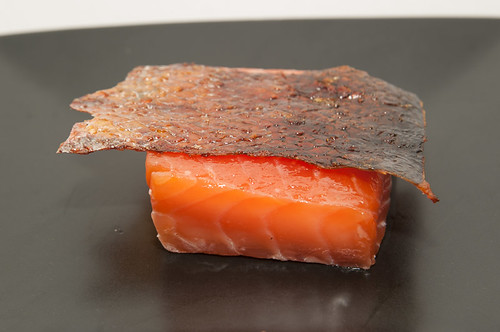 The only tricky bit is keeping an eye on the temperature so it doesn’t get too high. If the salmon turns pink and/or starts leaking protein, it’s too hot. You really need a probe thermometer for this, unless you have a sous vide setup. How long it takes will depend on the thickness of the fish.

I’ve been laid low with a nasty cold the last couple of days, my coughs almost registering on the Richter scale in North Cambridge today so I needed something hearty to pick me up. Only yesterday Daniel Doherty’s book, Duck & Waffle, arrived, named after the 24-hour-restaurant up on the Heron Tower in London where Daniel is executive chef. Flipping through it, I came to a recipe titled “Hangover Hash”. Now, what works for hangovers also works for colds, as you suffer a variety of similar symptoms so reading through it I realised not only was it just my thing, I also had all the important ingredients at home as the last thing I wanted to do was leave the house.
I made a few modifications in that I added garlic and ginger to the onion jam and didn’t bother making a peperonata but added fresh peppers instead and I substituted the Gruyere cheese with Cheddar and Gran Padano, as that’s what I had. Tasting it, I thought the chorizo I had used (the spicy variety from Renilla) added enough heat to the dish without the need of extra hot sauce. The sausage had rendered beautifully, infusing the other ingredients with its spicy oils. I was really happy with the textures and flavours, perfect in my state. I didn’t even need a lie-down afterwards. It came out looking like this, almost like in the book: 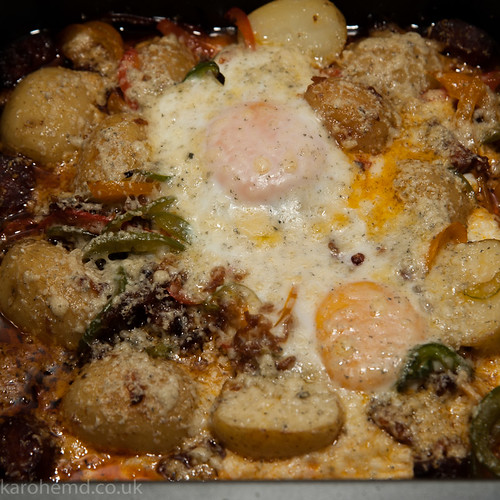 In the book photo, the dish has no cheese on it and the yolk is a beautiful orange, not with a thin film of egg white over it but that’s the difference between a professionally cooked and shot dish and one of mine.
Note for the future: I’m going to add the peppers at the same time as the eggs so they cook even less for more crunch.

The recipe was simple, just took a while, at least when you make the onion jam from scratch. I’m looking forward to trying more recipes from this fantastic looking book. If you have a tablet or similar device, the kindle version is quite cheap at the moment. This is my favourite format for cookbooks as I have no space for books in my tiny kitchen.

After my meal at the Sportsman (see previous post), I walked around the harbour a bit, found and sat on the bench Peter Cushing donated to the town, had supper at Wheelers Oyster Bar and a couple of beers at the Black Dog before wandering back to the station for my train home. 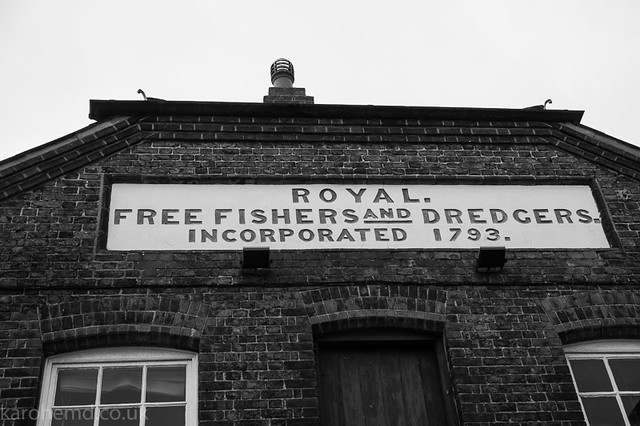 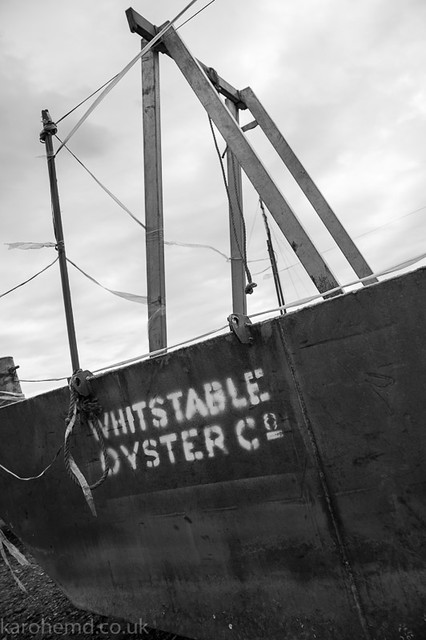 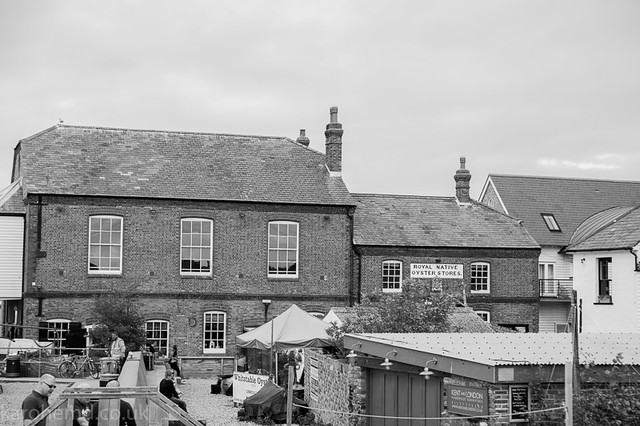 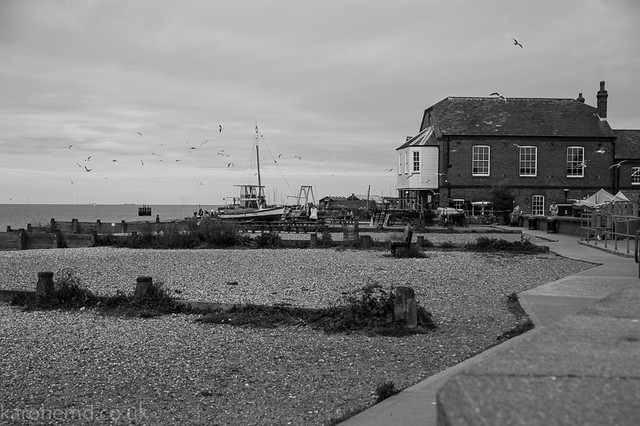 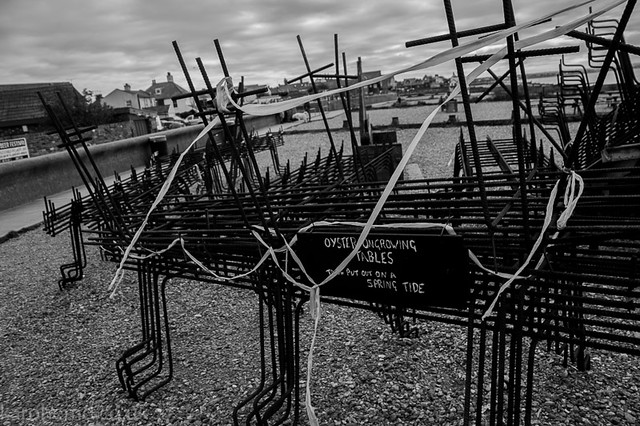 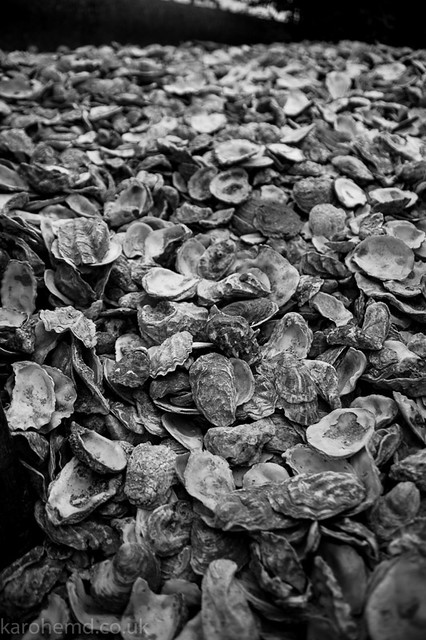 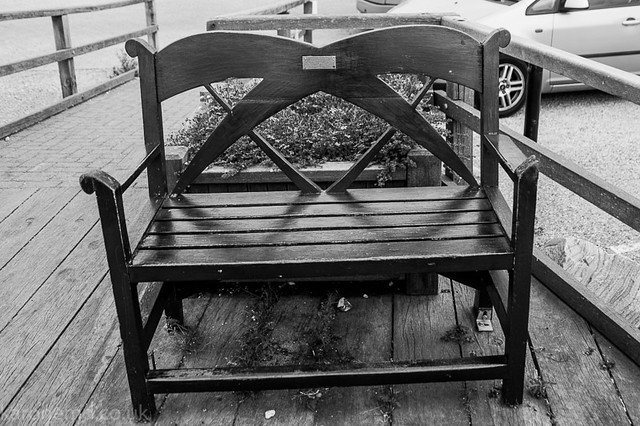 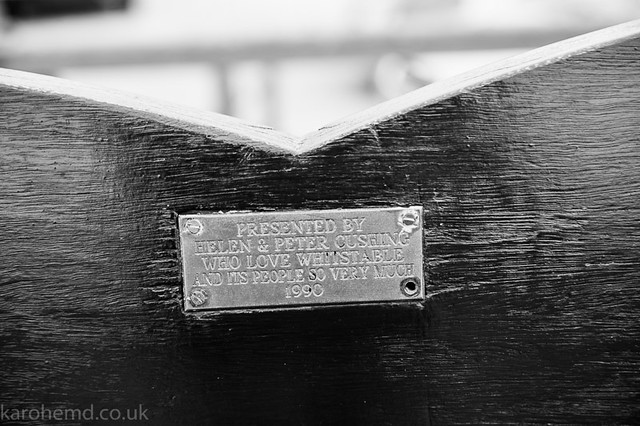 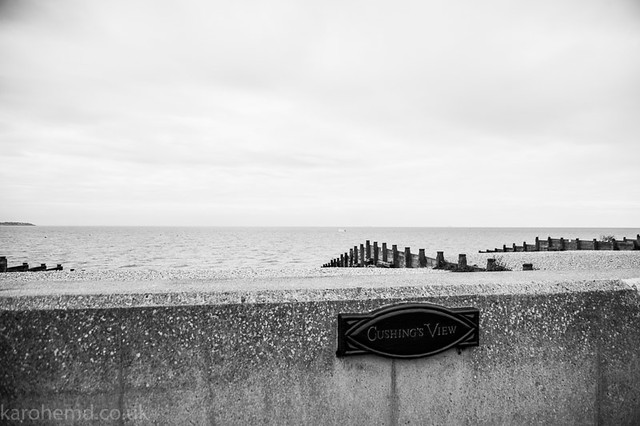 I’ve been lax in posting to this blog for various personal reasons and hope to take it up again soon.
One recent restaurant visit I can’t possibly miss to put on the blog was The Sportsman near Seasalter/Whitstable right on the Kent coast. I’d had too many both raving reviews and personal accounts from friends and acquaintances with similar tastes in food that I couldn’t push a visit off any longer so I took a day off in late September and braved a morning train to London. I managed to get a seat on the London train so the start was less painful than it could have been. The train from London Victoria is quite pleasant as it trundles through the Kent countryside, especially as it turned to be a fine day indeed. Whitstable station was quite deserted so I had to call for a taxi which arrived about 10 minutes later. The ride on the coast road was also quite pleasant, lasted about 15 minutes and cost 8.30 (!, cheaper than a taxi from Cambridge station to my house). I got to the Sportsman a bit early so had a drink in the conservatory. 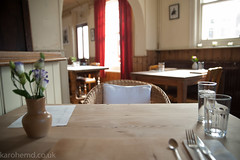 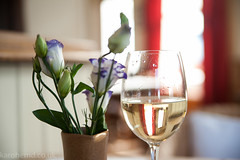 After I had taken my seat in the light and airy room, I ordered the tasting menu and a glass of Picpoul and relaxed. The first nibbles soon arrived and gave an indication of what was to come in terms of both freshness of ingredients and flavour. 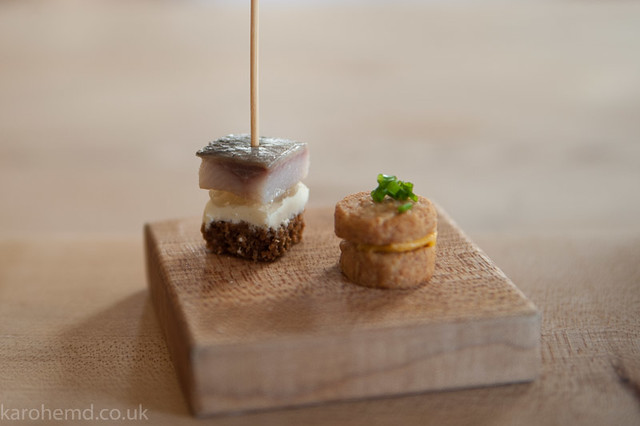 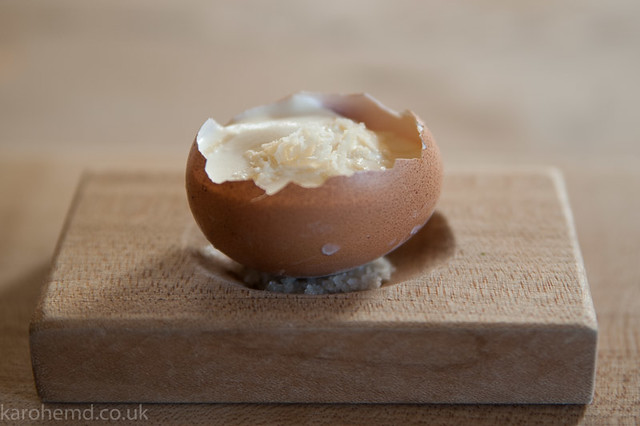 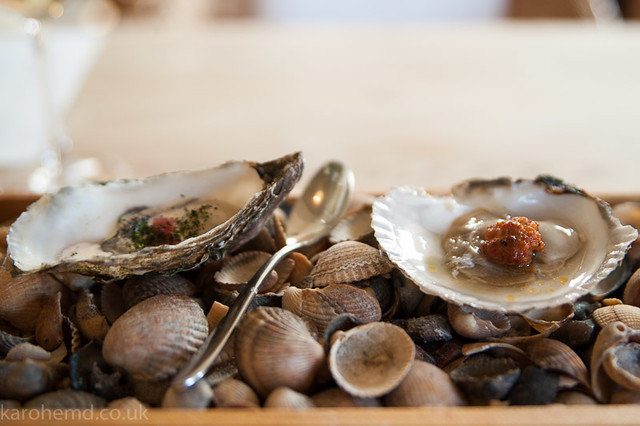 Poached rock oyster on the left, raw native oyster with chorizo on the right. The native one won for me but both were excellent. 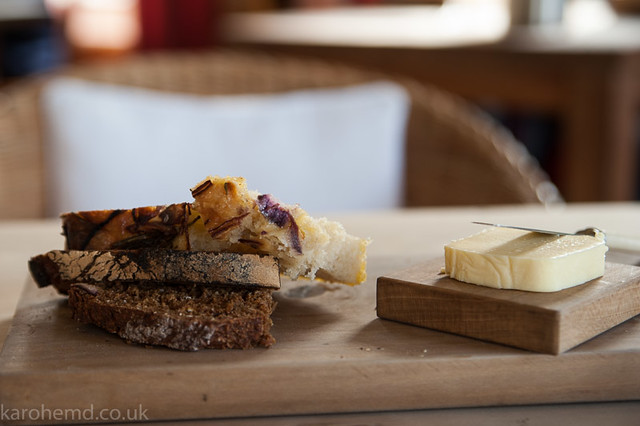 Foccaccia, soda bread, sourdough, butter, all made in house. These were replenished throughout the meal as most dishes didn’t have a carb accompaniment. 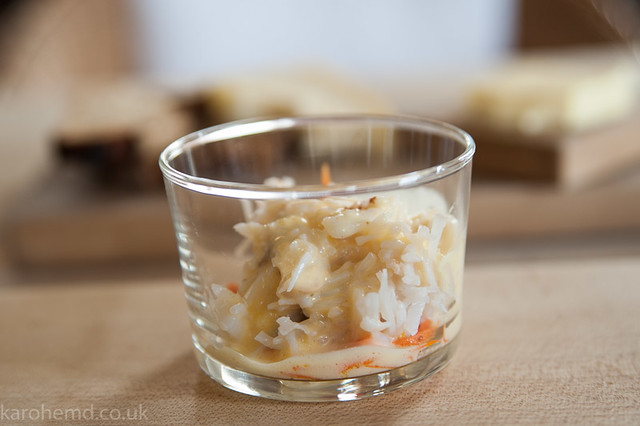 Crab, carrot, Hollandaise. The Hollandaise was very light and there was just enough to bring everything together. The crab naturally was as fresh as could be and an utter joy. 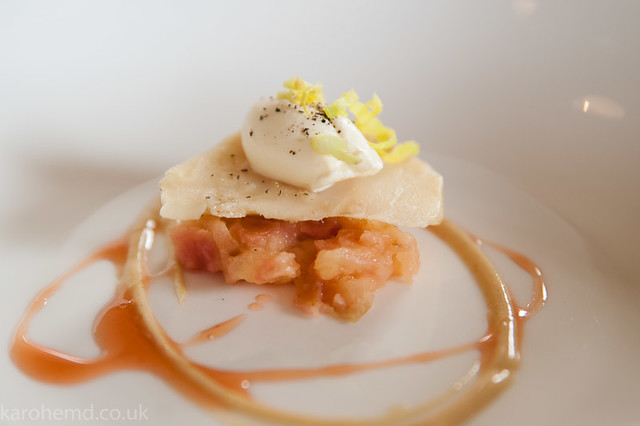 Salt baked celeriac, stewed apple, mustard, fresh cheese. I’m not a huge fan of celeriac but both the slow baking and the combination with the tart apple took away that particular flavour and made it a lovely dish. 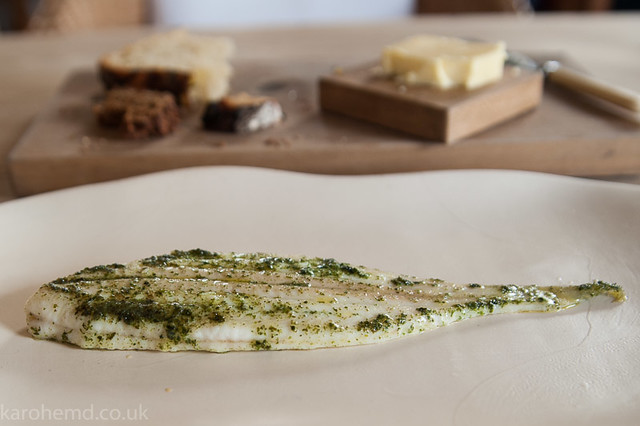 Slip sole in seaweed butter. This simple dish was my favourite. Letting the ingredient speak for itself, the fish was cooked on the spot and that’s all you needed, except a little bread to soak up the juices. 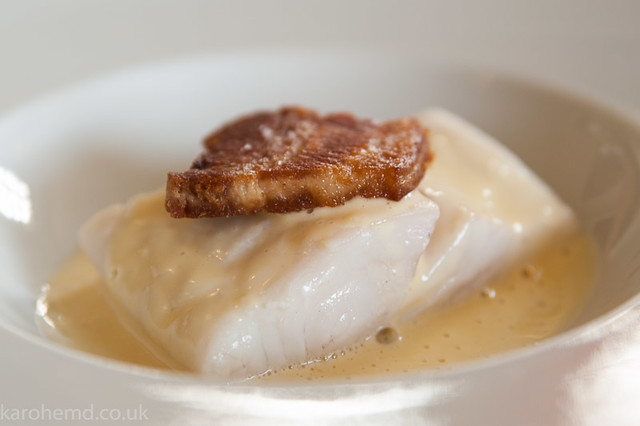 Brill braised in oxidised meursault with smoked pork belly. This was another highlight, the dense fish and the pork harmonised beautifully and the best beurre blanc I’ve ever had brought everything together. 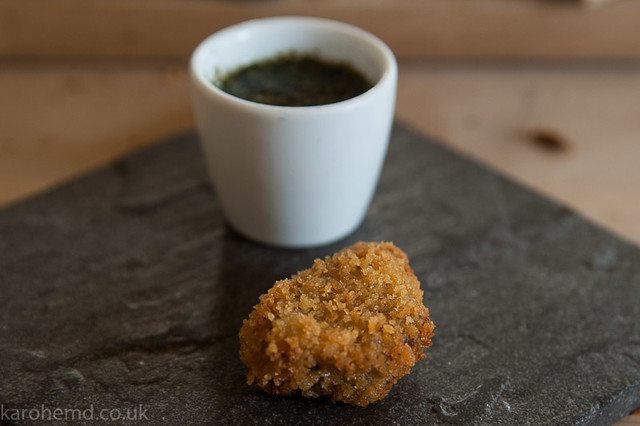 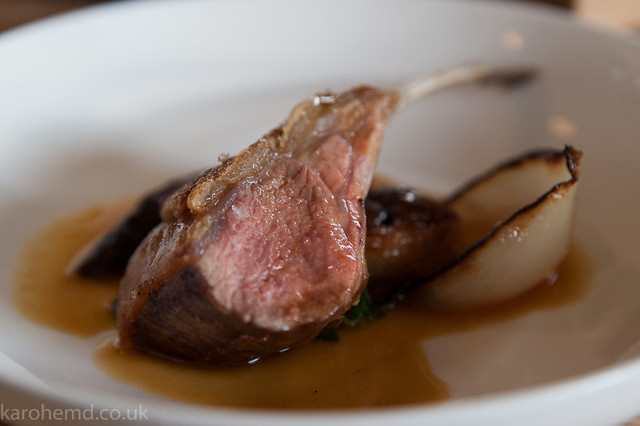 After all this glorious seafood, the lamb main was almost a letdown but only almost as the flavours were great, the meat cooked nicely and it was sourced from the farm across the road, so probably even closer than most of the seafood. The little extra course of the braised lamb croquette with mint sauce was a nice touch. 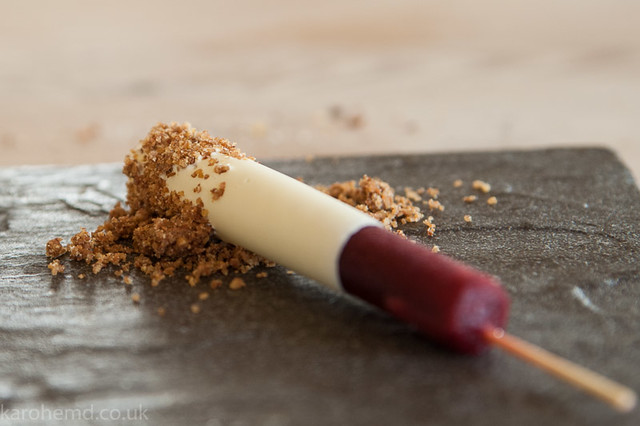 The pre-dessert was an apple and blackberry ice lolly with crumble. Fresh and tart, this was the perfect palate cleanser after the rich lamb. 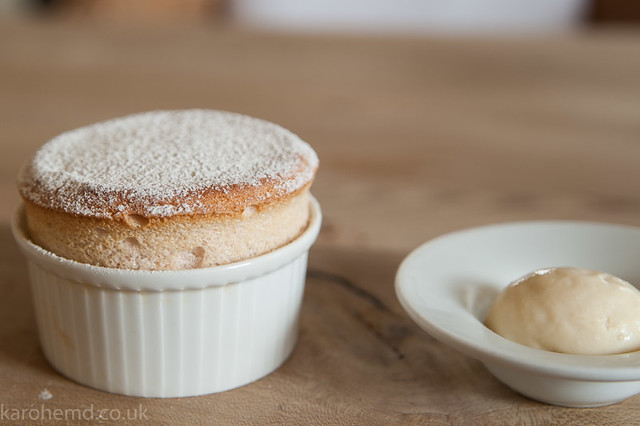 Plum soufflé and kernel ice cream. A beautifully cooked, fluffy souffle with excellent plum flavour, complemented by the ice cream made with plum kernels, a flavour similar to almond. 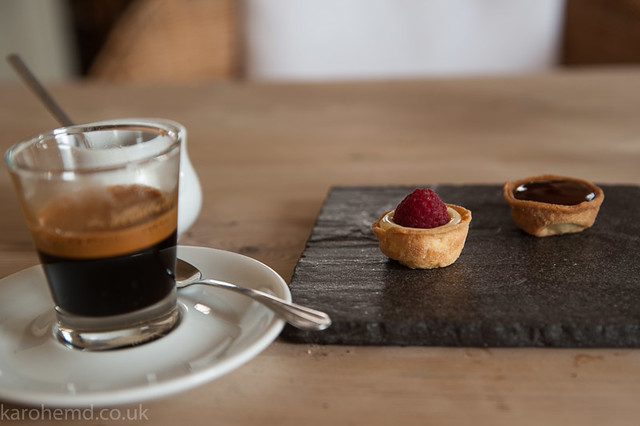 And finally, an espresso with little tartlets: custard/raspberry and chocolate/salted caramel.

Service was friendly and efficient throughout the just over three hours I spent there and made the stay pleasant indeed.

A note to those who like myself rely on public transport: There are two local taxi firms but they don’t have many cars so booking in advance is highly encouraged, although a breakdown like in my case propbably won’t help there, either.