I have had this sort of scratching at restaurants and always wondered how they get them so light and crispy, so unlike the hard, chunky ones you get in little bags at the pub. I read up on it and saw someone on Food Network make it and found it’s really easy, there is just quite a bit of waiting involved.

I bought some belly pork from my butcher, took off the skin and boiled it for an hour or so. After it had cooled down a bit, I scraped off any remaining fat/meat (you can season and eat it) and dehydrated it on a rack on the lowest setting in the oven. This took about a day but I don’t have a dehydrator which would work quicker.

Then I cut the skin into pieces and deep fried them in oil at 180°. They puff up and curl. The result is a really crispy and light scratching as there is hardly any fat left. I just seasoned mine with a little salt but you can try other flavour combinations, I guess. 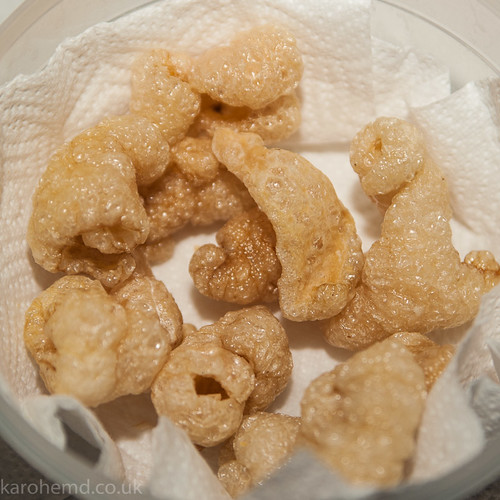 Here’s one of them in action:

I posted this to facebook (and excerpts to twitter) but I wanted to put it somewhere a little more permanent and easier to find again.

Watching Great British Menu this year always reminds me of my maternal granddad’s favourite story:
He was on the Western front and sometime after D-Day (I can’t remember the date), having been wounded by a grenade in another skirmish earlier, he was captured by US troops. The POWs were shipped to the US and as they stood lined up on the boat, they were asked who could cook. My granddad, having been a master butcher and pub cook before he had to fight in a war he really didn’t want to fight in, stepped forward. He was accepted and cooked the prisoners’ meals.
One night after service, he sat down to his own meal, a plate of Tellersülze (sort of like brawn but with more gelatine) he’d made from what would have ended up in the bin, one of the US senior staff came in, pointed at his plate and demanded to know what it was. A bit frightened, my granddad apologised and explained he’d used basically the rubbish. The officer insisted on trying it and liked it so much that my granddad had to cook it for the senior staff’s lunch the next day.
We still don’t know how but when he was released he managed to nick a set of US Army cutlery which is still in my family’s possession (I think the teaspoon went missing at some point).
He also carried the splinters from that grenade in his hip until he died in 1985.
And yes, that’s who I have my cooking genes from. 🙂